Carolina Herrera offers a sophisticated variety of silhouettes with a movement and body for the Fall bridal collection.

“Women come [here] for that white shirt wedding dress,” explained the designer, who is well aware that a Herrera bride wants “the right balance between sleek and dramatic”—something clean without too much froufrou. Two of the most striking looks were the most minimal: one a rich cady number with a dramatic neckline, the other a body-skimmer with a scarf-neck that tied in a big, streamed bow in back.

For grand ceremonies like a cathedral wedding, there were dresses with magnificent fullness of which even Scarlett O’Hara would have approved. A guipure lace gown seemed destined for the woman who wants to channel Grace Kelly. Gordon, who appears to be happily settled into his position, modernized a floral fil coupe jacquard dress by abstracting the blooms, and he updated traditional embroideries by using them in a larger scale. Of note was a dress with illusion sleeves and bodice with stitched white blooms that seemed to have been whispered on, as in Sandro Botticelli’s The Birth of Venus.

The sheer romance of a Watteau back or a feather-like bustle was balanced, the Herrera way, by a certain pragmatism: pockets in ball skirts, say. Several of the gowns were convertible, with a detachable skirt or cape. Choice was abundant throughout this collection, as well as in the showroom, where a smocked bohemian-dream Look 18 from the recent Spring 2019 show hung next to a sample of Barbara Bush’s wedding-day luncheon number. With these “cocktail options,” Gordon hoped to demonstrate that there needn’t be “rigid walls” between bridal and ready-to-wear collections, though there must always be that red—or the designer quipped that in the case of bridal, blue—thread that makes a design a Herrera. “It’s a brand with a strong female founder, who designed for herself and the women she knew,” said Gordon. “I think the brilliance of Mrs. Herrera’s [approach] was not trying to create a uniform and have all brides look the same, but tapping into what makes each woman unique and giving her the dress that speaks to that.” Clearly Gordon is expanding eloquently on that conversation. 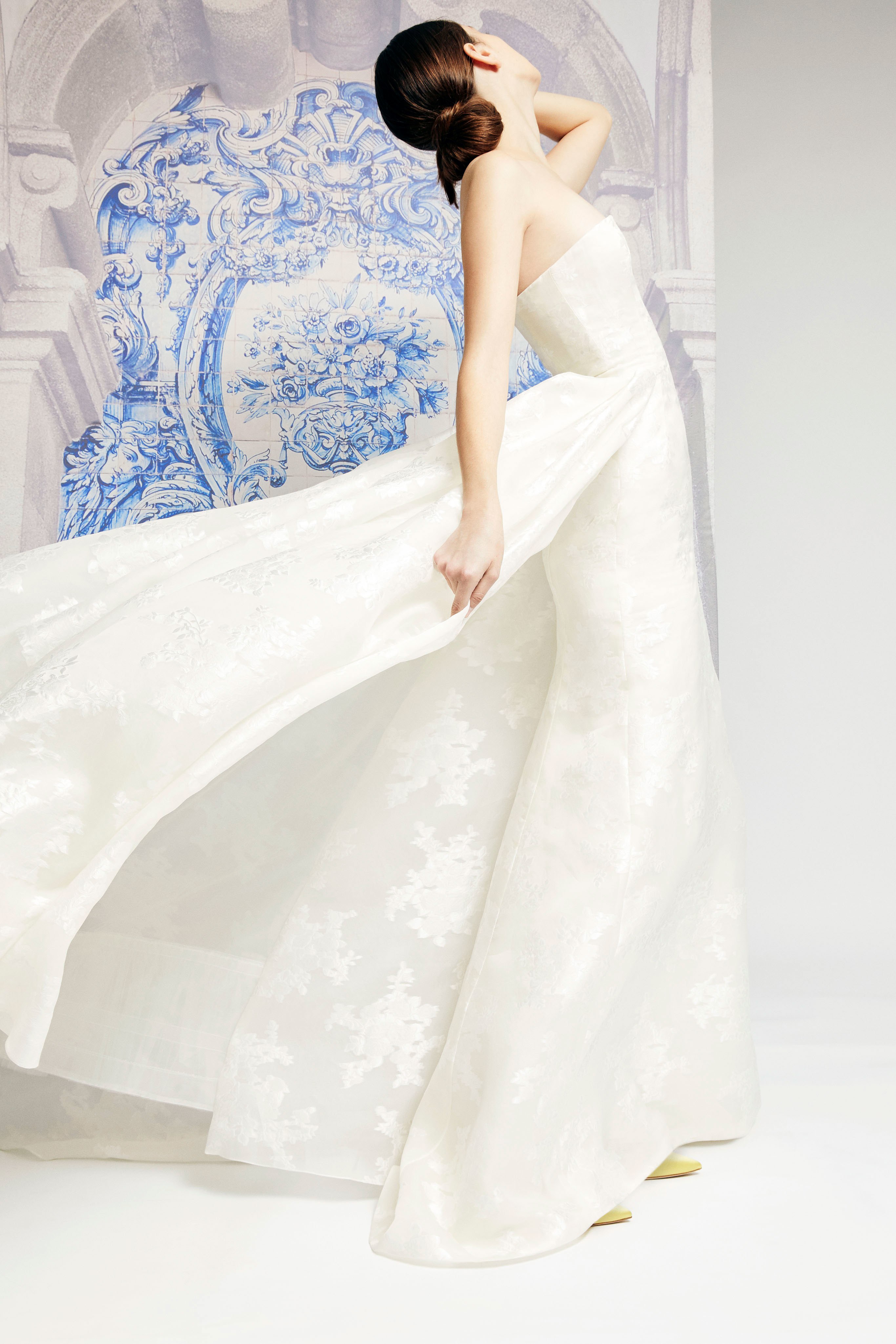 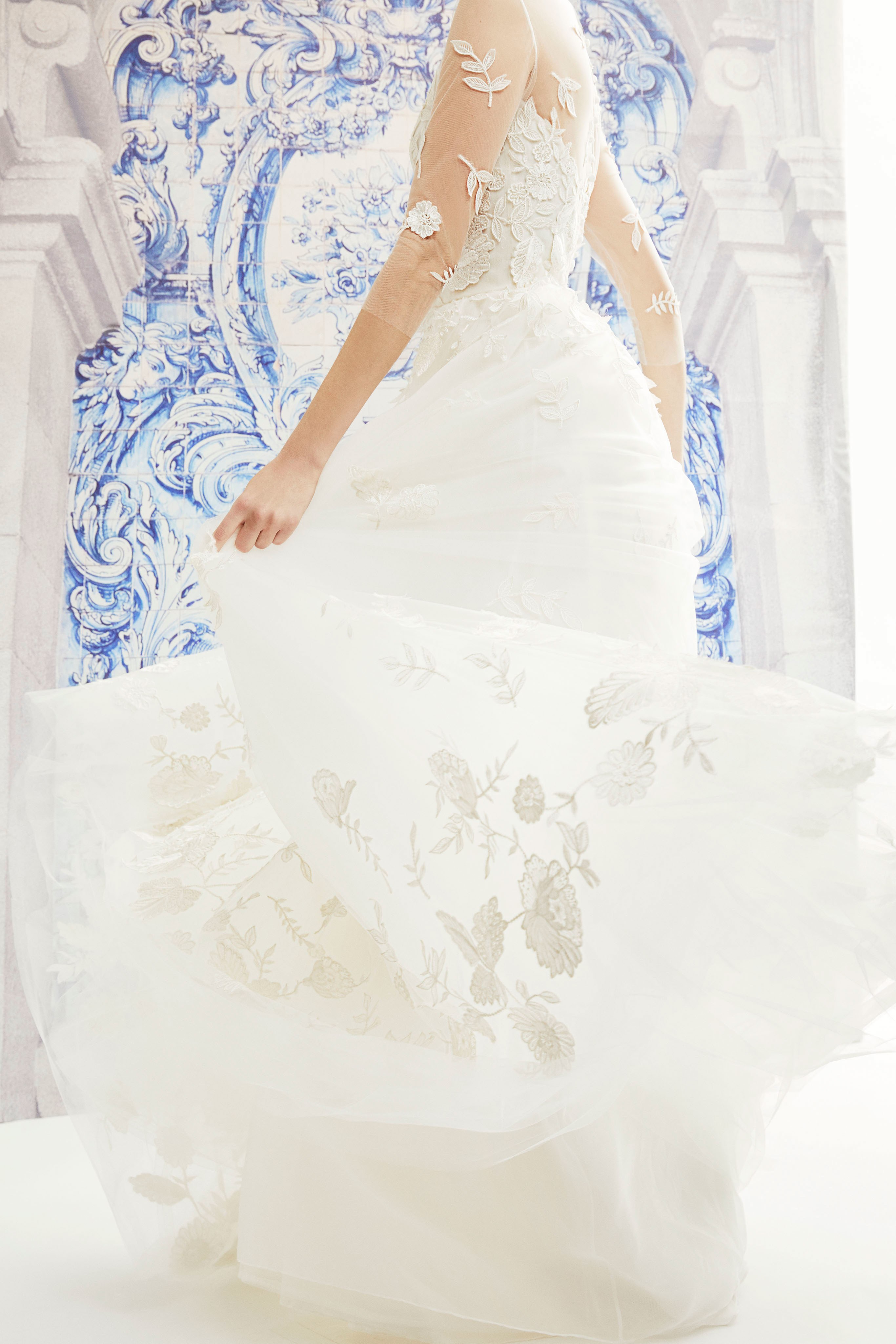 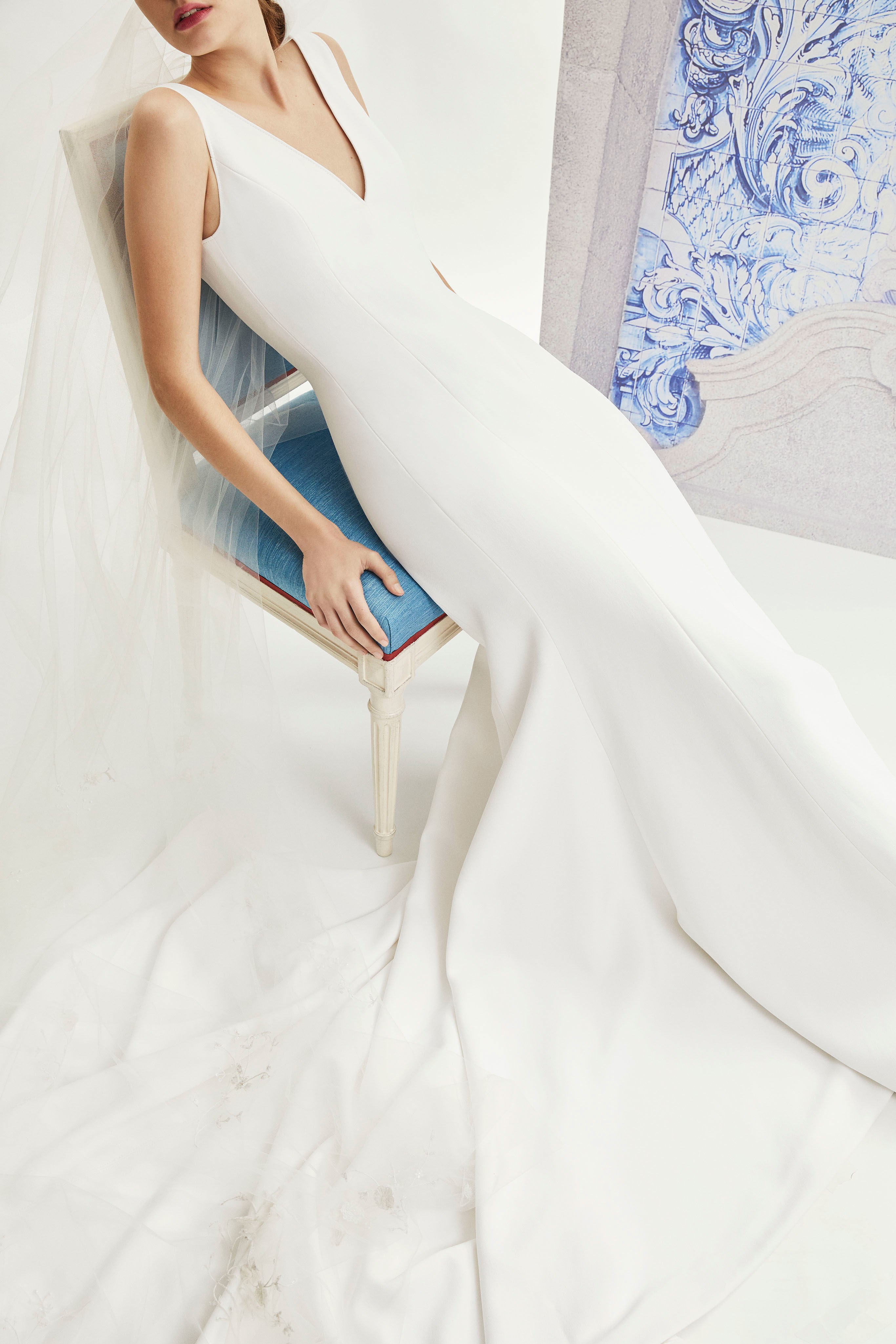 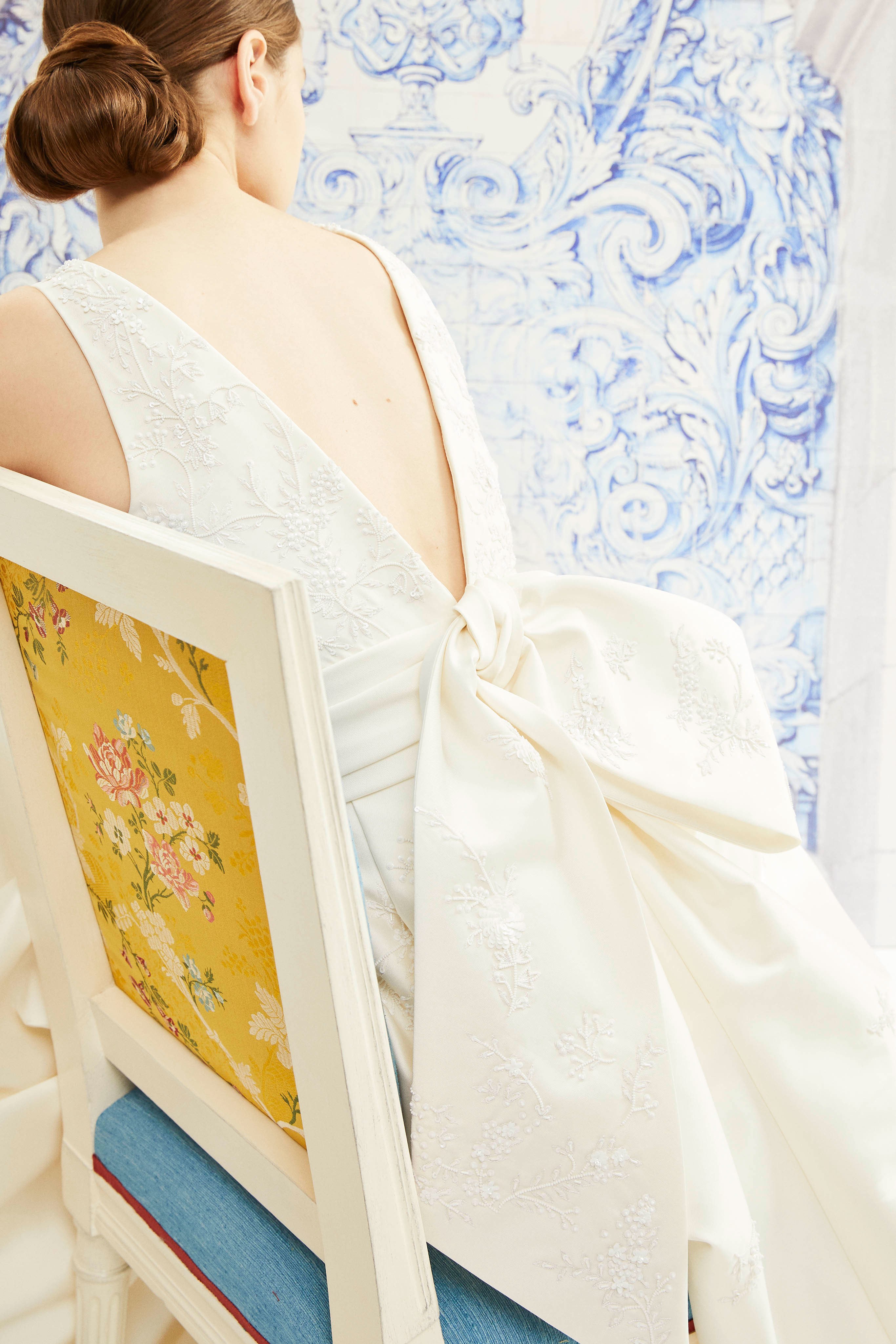 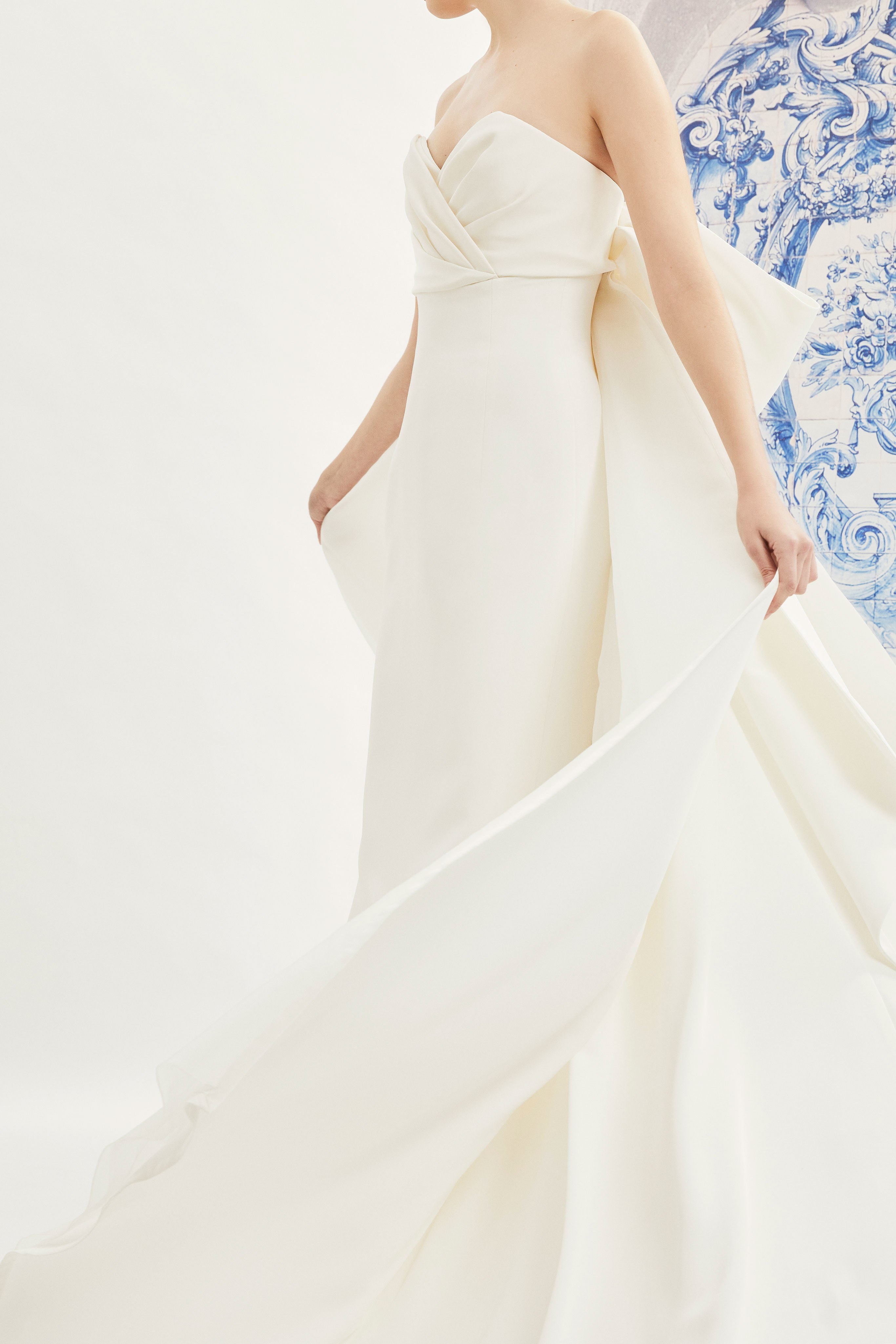 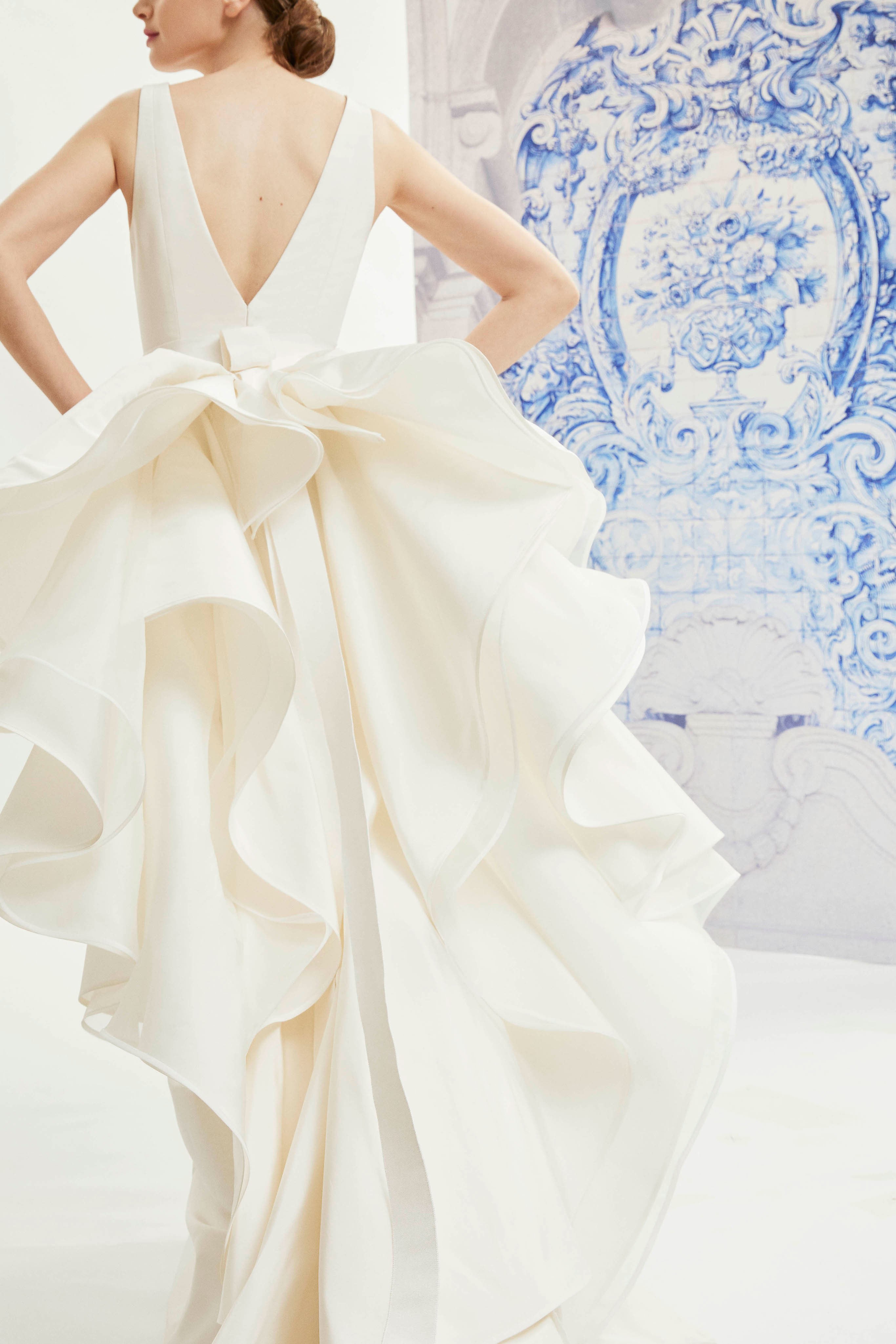 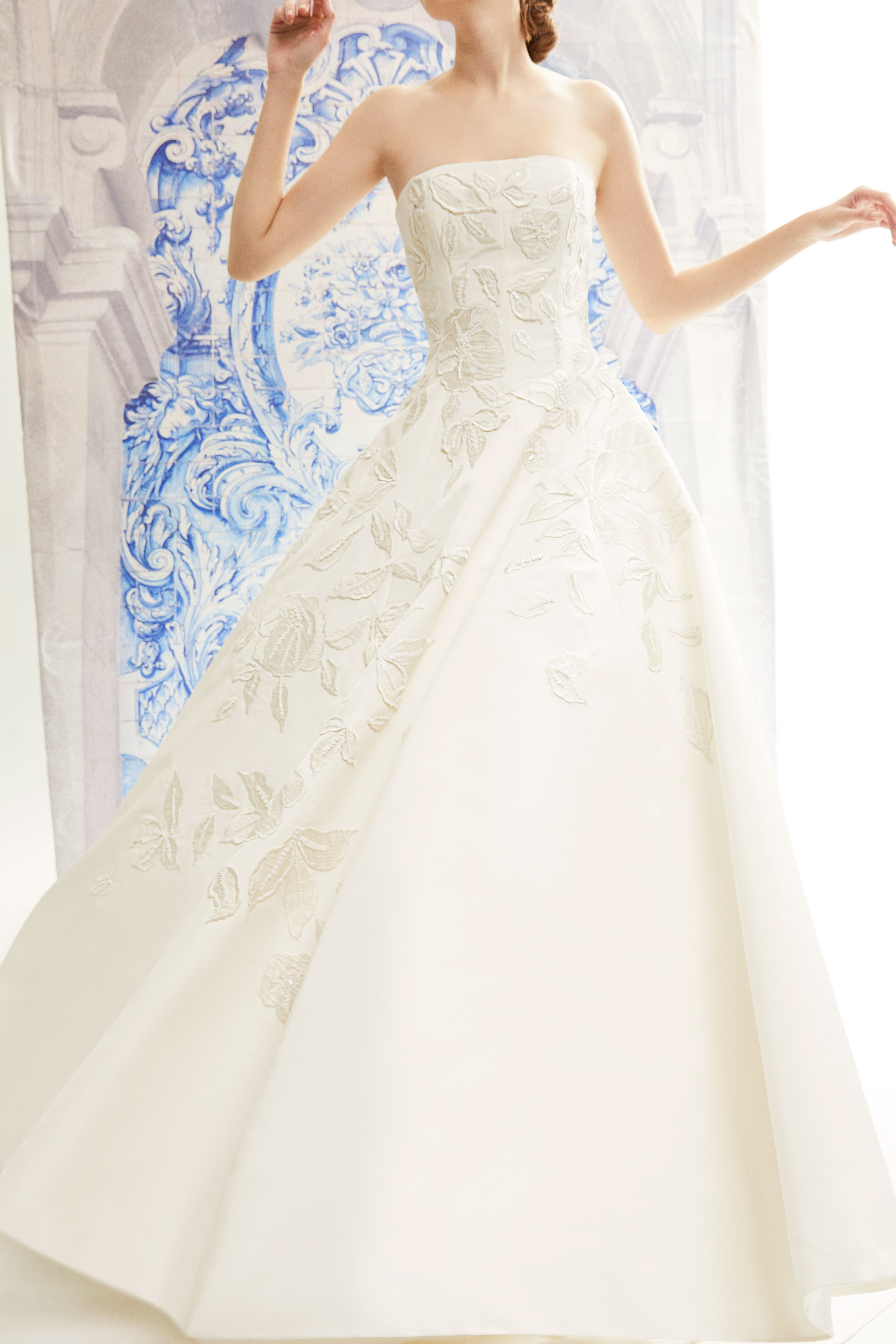 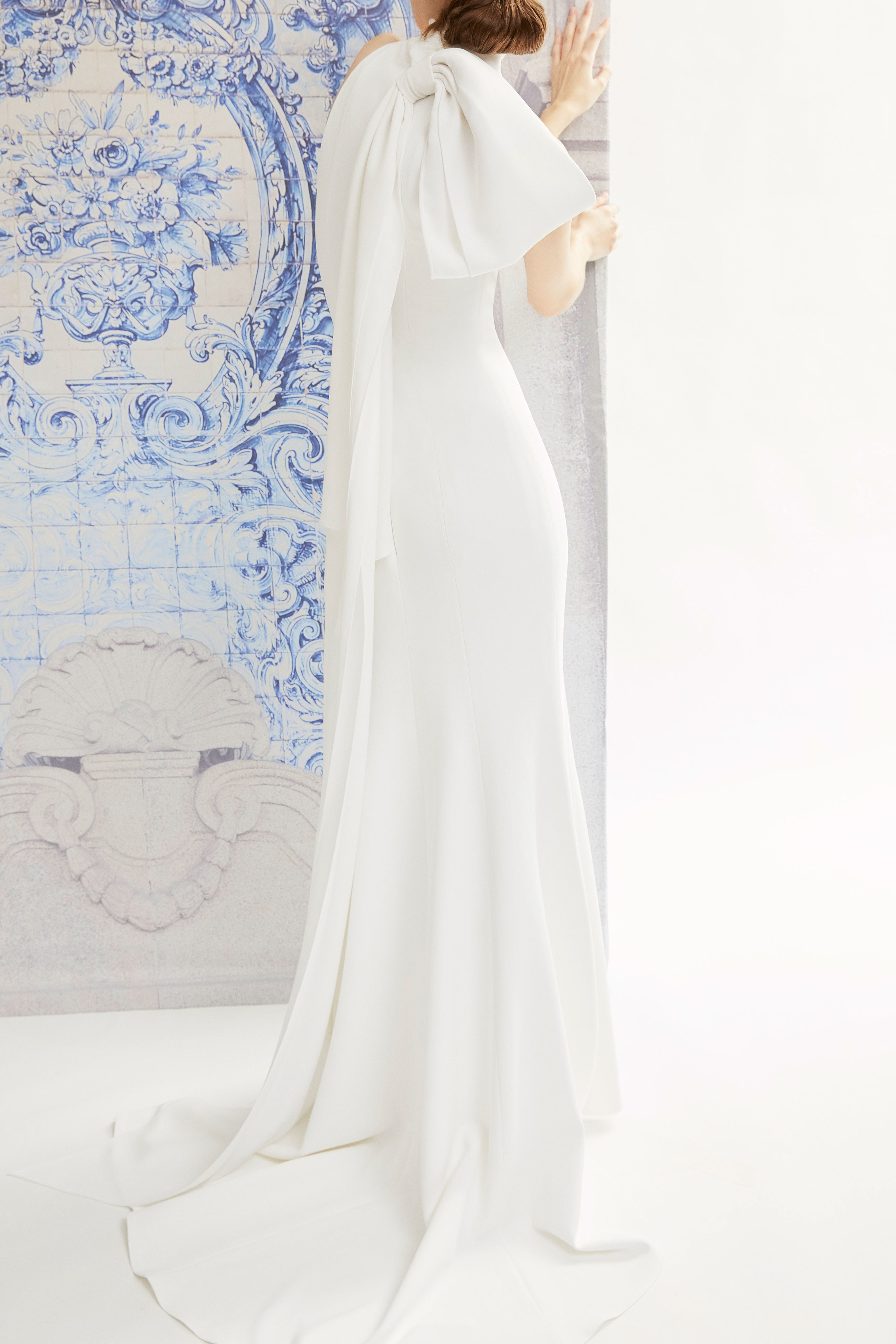 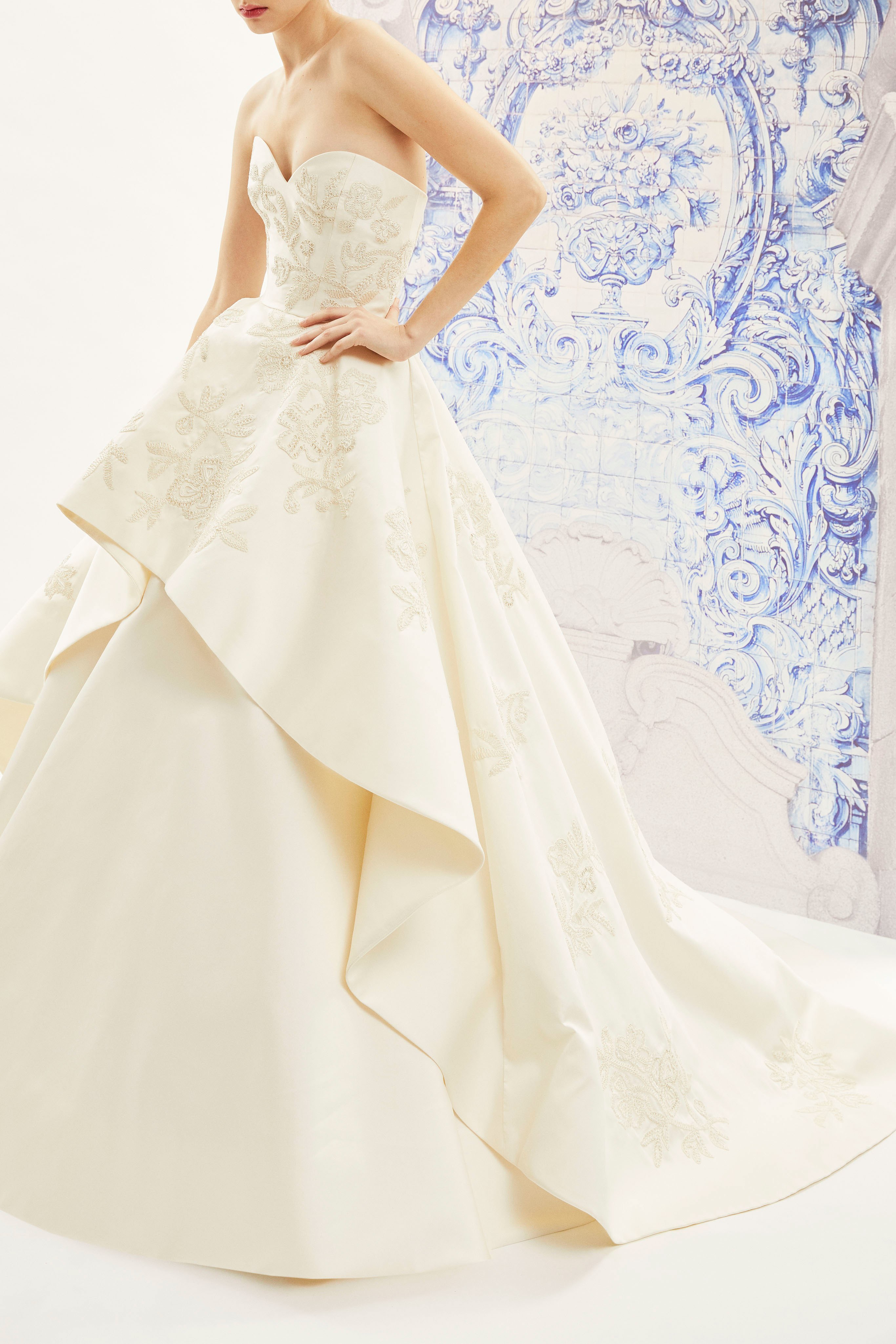 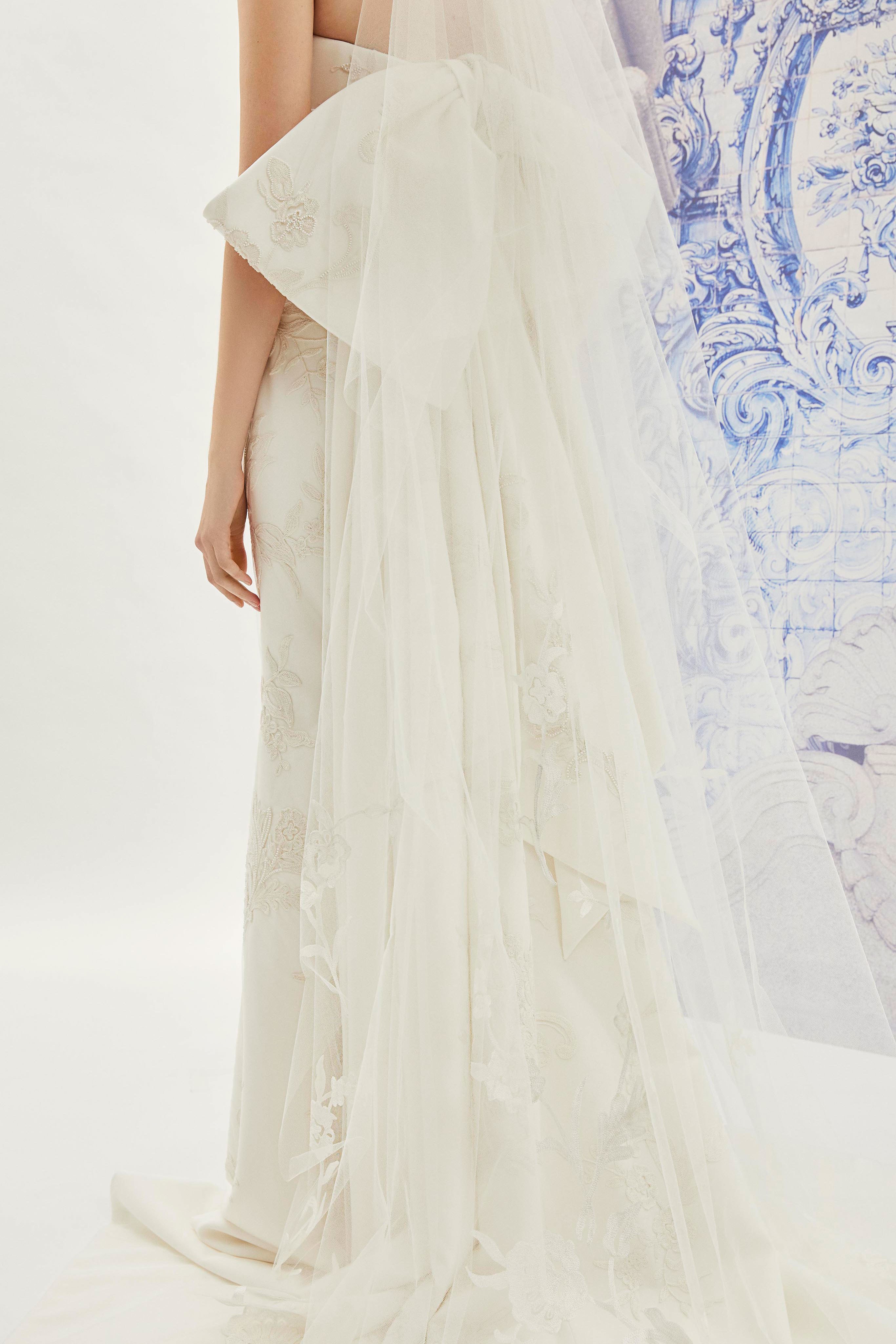 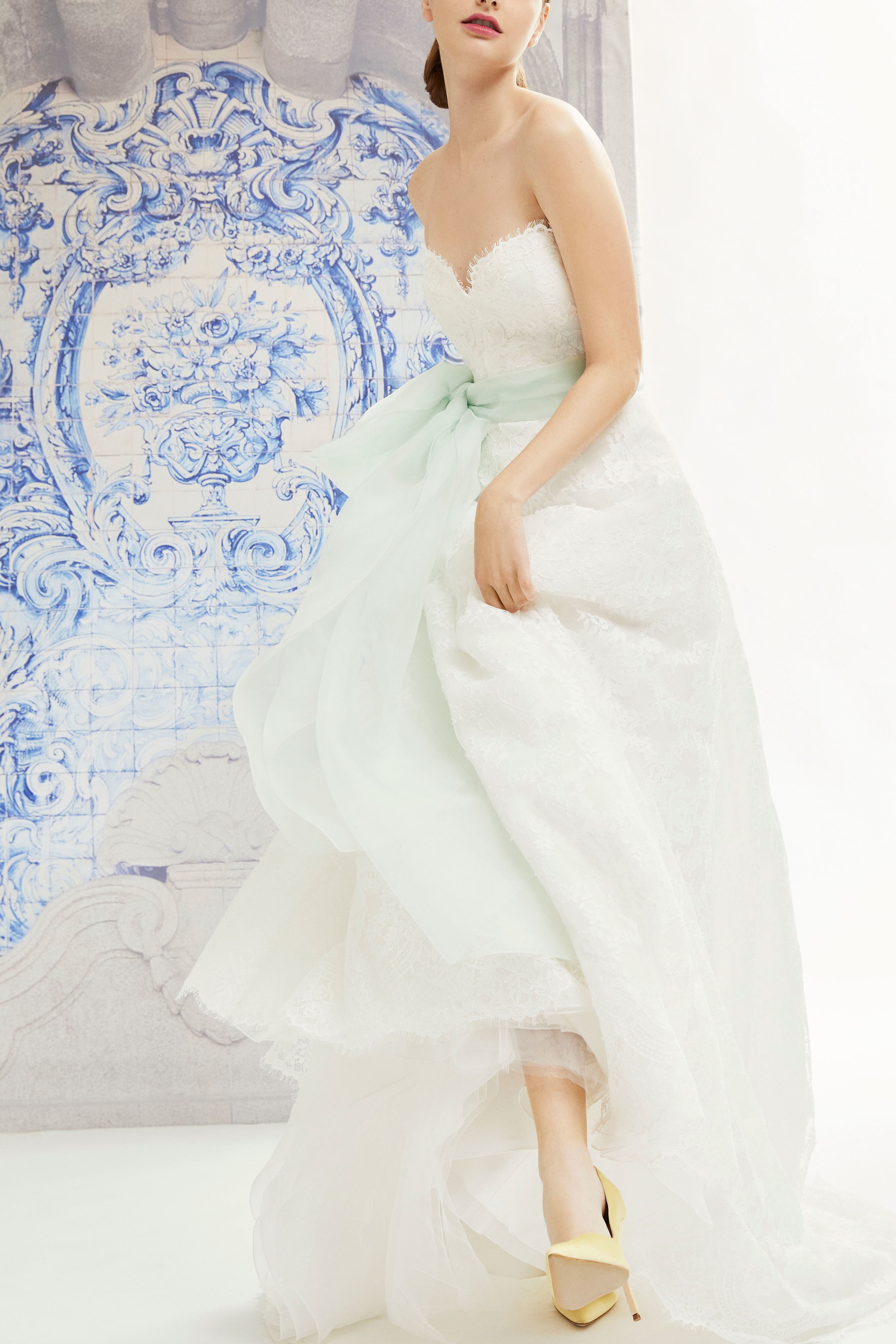 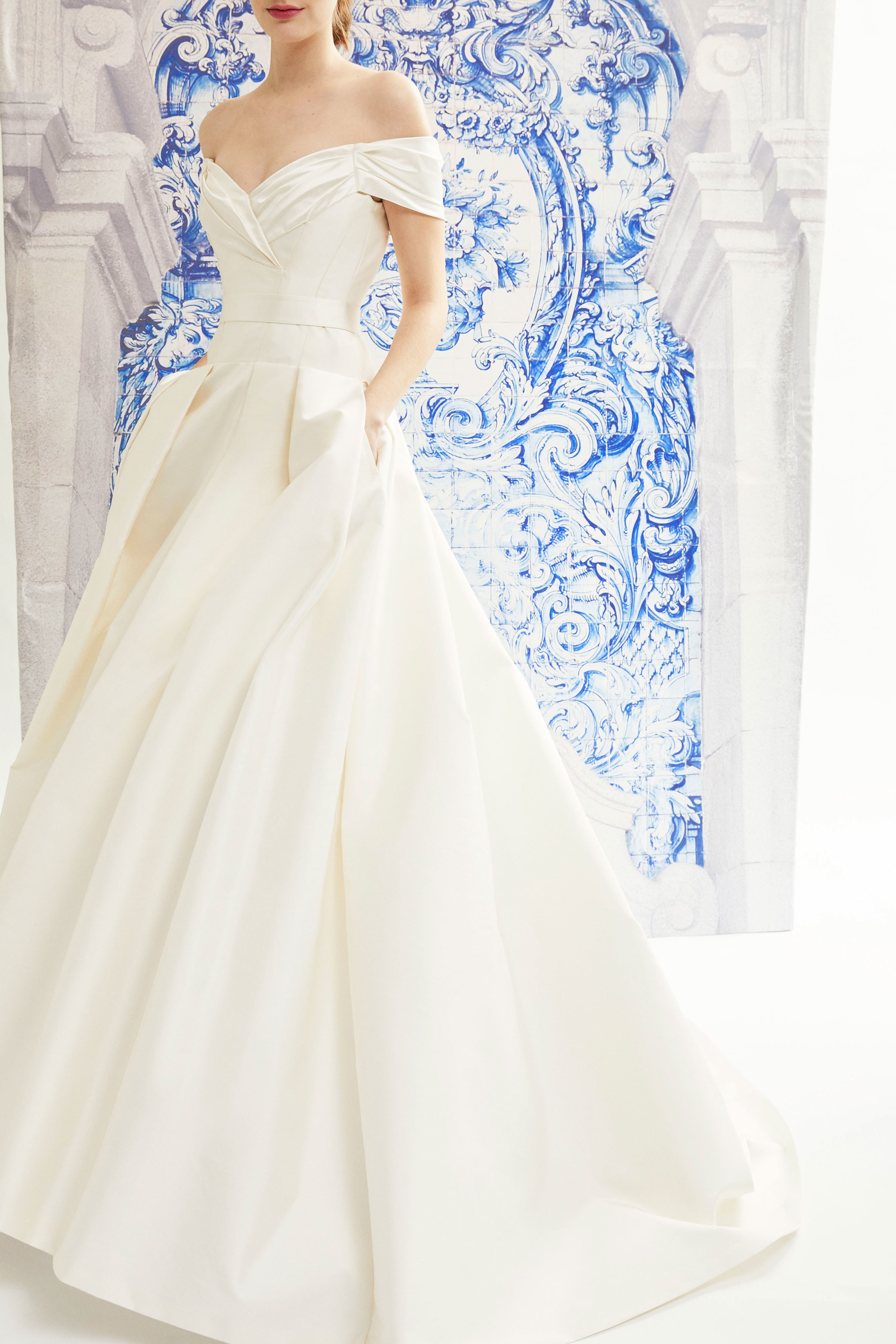