Balmain announces the opening of its first Miami boutique in the Bal Habour Shops.

The interior relies on the new store concept for the brand, conceived by Creative Director Olivier Rousteing and designed in partnership with the three young architects from Paris’ Studio AMV: Anna Philippou, Marie-Charlotte Prosperi-Fouchard and Victoire Guerlay. This new concept was first introduced in the brand’s Milan flagship, which opened in April of this year.

“Miami is one of my favorite destinations and my family and I have spent many vacations here. But, of course, the decision to open here has little to do with my love for the area’s beauty and distinctive culture and everything to do with Miami’s uniquely vibrant fashion and retail environment,” explains Massimo Piombini, Balmain’s CEO. “There is a very strong bond between Olivier and America, which is why we are strengthening both our retail and wholesale channels across the United States. What compelled us to choose Miami for the location of our third American boutique is the added bonus that this is a very important destination for the Latin American consumer—and Balmain has long been popular with that shopper, as well.”

For the house’s new prototype design, Creative Director Olivier Rousteing directed the architects at Studio AMV to focus on the house’s Parisian roots. “Since this design will serve as a prototype for all future addresses, Olivier wanted the stress to be placed squarely on the second part of the house’s official name: Balmain Paris,” explained Anna Philippou of Studio AMV. “He made it clear to us that he wanted Balmain to transport Paris to all corners of the globe, to make each Balmain visitor feel the atmosphere of Paris, wherever they may be in the world. But he also ensured—at every step of the process—that this was done in a modern fresh way, that avoided all the expected clichés.”

The Inspiration is the Classic Parisian Hôtel Particulier Rousteing oversaw Studio AMV’s efforts to create the house’s new store concept. “Our brainstorming sessions took off from a consensus on the need to riff on classic Parisian residential architecture,” explains Rousteing. “From there, we ended up breaking down the codes of the hôtel particulier into ten particular elements, each of which was then associated with one key Balmain signature. Since I wanted each store visit to offer experience, intimacy and discovery, we divided the space into a series of connected, distinct rooms, each inspired by the look of a living space (library, garden, boudoir, etc) and each dedicated to the display of one Balmain collection.” 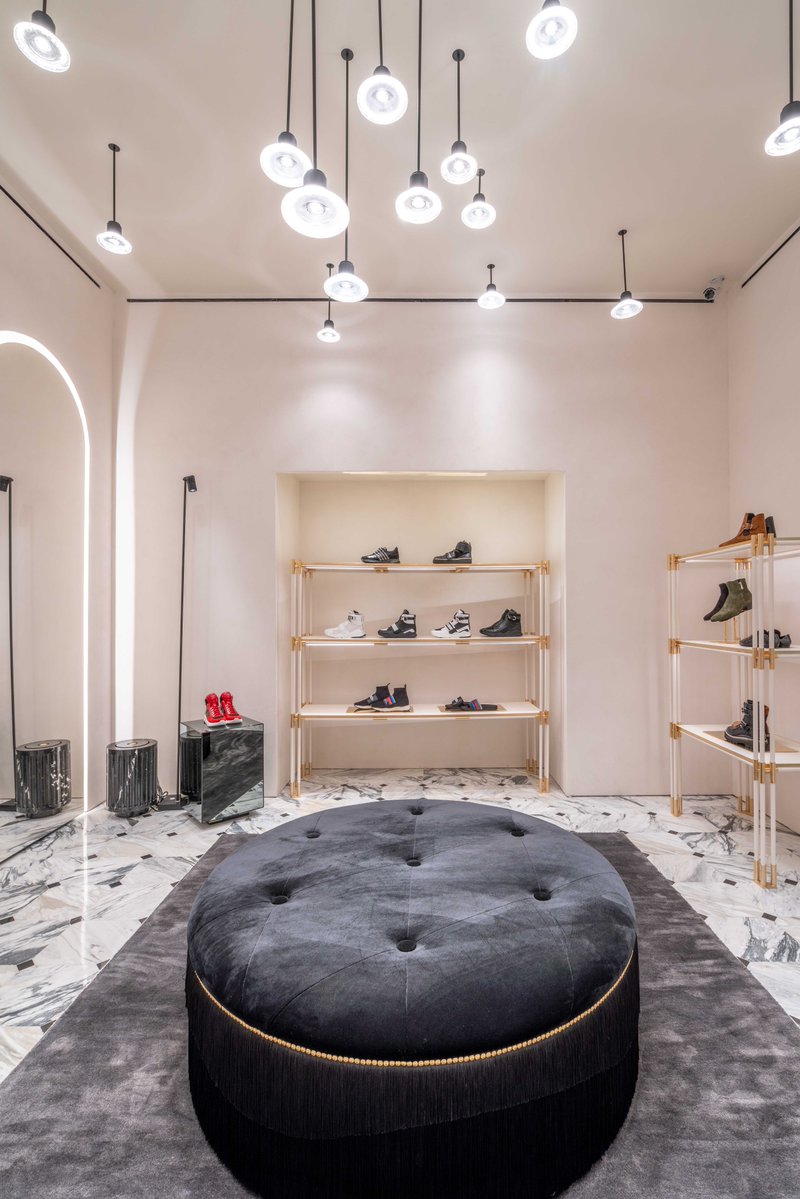 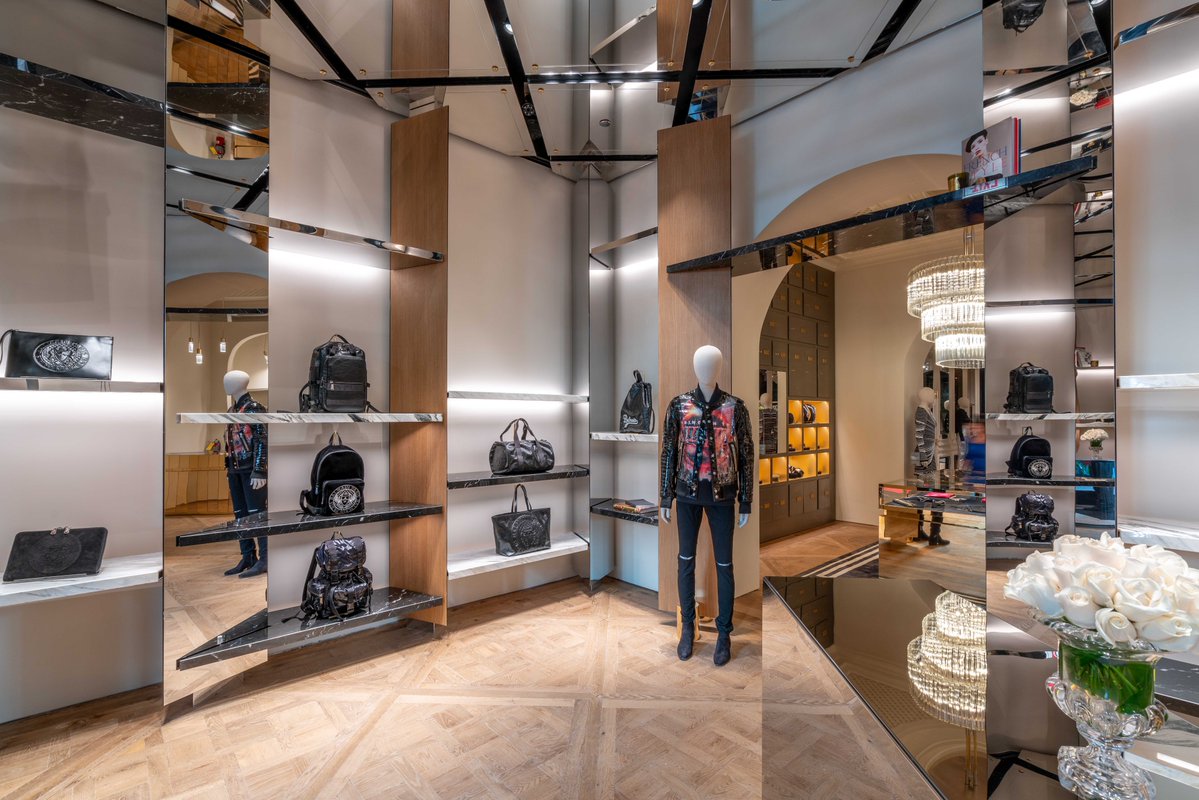 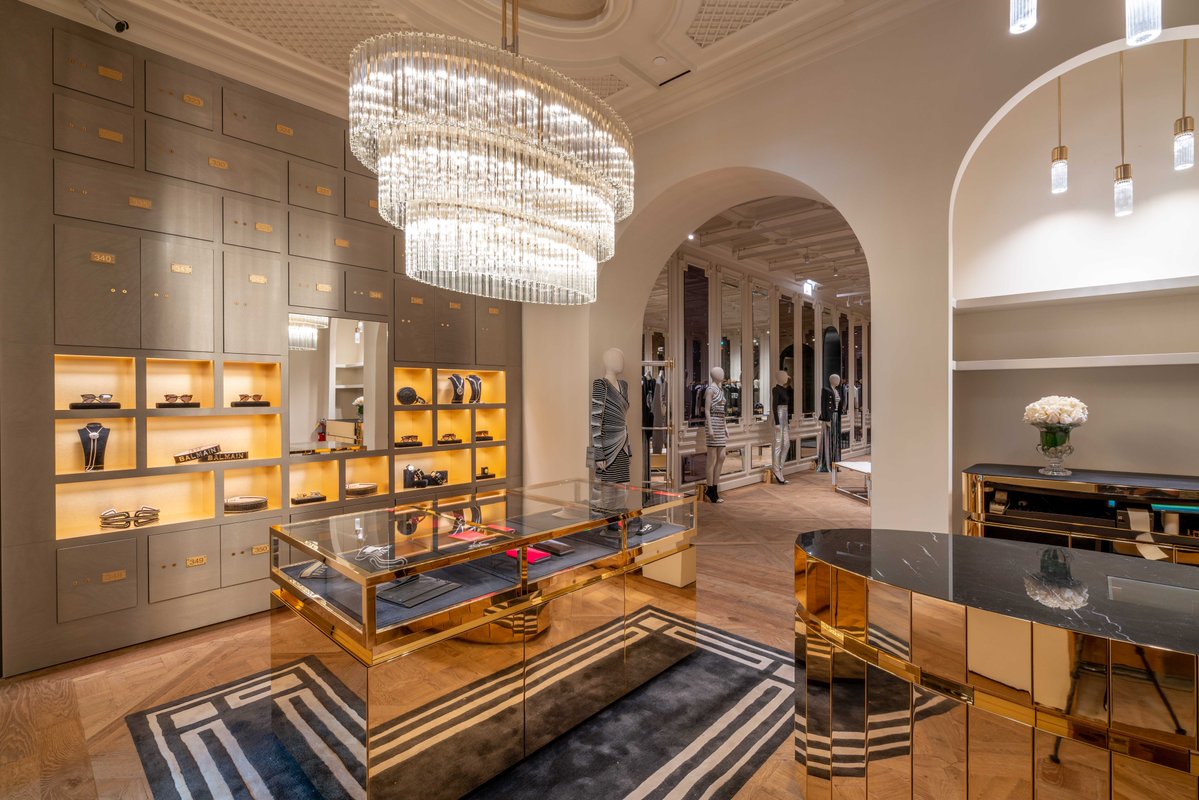