Jean Paul Gaultier added a personal twist to his big retrospective at the Grand Palais in ...

Jean Paul Gaultier added a personal twist to his big retrospective at the Grand Palais in Paris.

The Paris showcase comes four years after the exhibition debuted at the Montreal Museum of Fine Arts — nine cities and 1.5 million visitors later — to find Gaultier embarking on a new career chapter, having halted ready-to-wear and focusing on couture, fragrances and special projects.

While painting the French couturier as an innovator and rebel, the exhibition also highlights the personal relationships Gaultier forged with models, musicians, filmmakers and other pop culture figures. The designer also displayed the first dress he ever made — in 1971 for Aitize Hanson to wear in a modeling contest.

Dresses are displayed on mannequins without glass partitions, allowing close inspection of the makeshift creations from Gaultier’s debut 1976 collection — employing a repurposed bustier, straw place mats and panels of cross-stitch fabric — to the intricate couture creations of his later career.

Throughout are landmark styles popularized by their famous wearers, including the breast-baring jumpsuit Madonna wore on the catwalk in 1992 during an amfAR event, along with costumes Madonna, Kylie Minogue, Mylène Farmer and Beth Ditto donned for the stage.

The exhibition, curated by Thierry-Maxime Loriot and designed by Agence Projectiles will run through August 3rd, reprising the animated faces that are projected onto mannequin heads and blink, glance around at visitors and speak every so often. Its next stop is Munich in September. 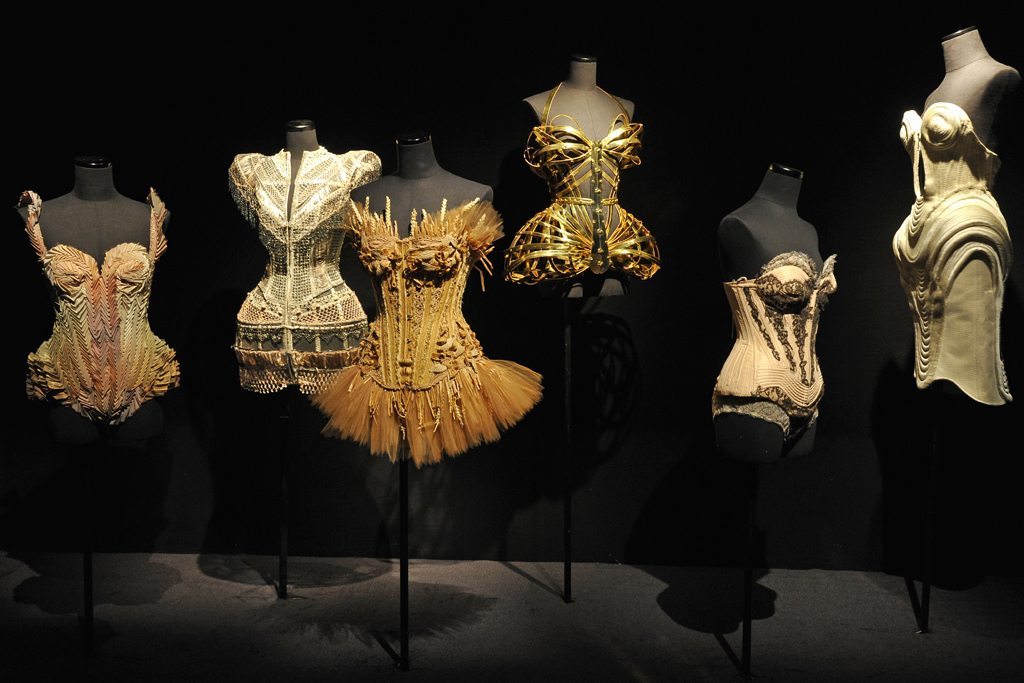